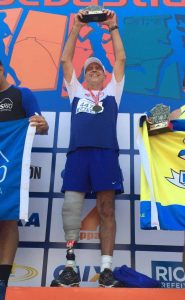 The race marks Eduardo Menezes’ moving return to the company’s racing team after starting to wear a leg prosthesis .
More than 150 DELPHOS in-house and former in-house associates participated , last Saturday, January 20th, in the São Sebatião Race, held in Rio de Janeiro. The first race of the year held in this city was an important landmark for the company :   president,Eduardo Menezes took part in it., a little after the executive started to wear a posthesis in his right leg, on account of a serious accident he suffered in July last year.
The race comprises part of DELPHOS’ Life Quality Program (Programa de Qualidade de Vida), created in 2003, traditionally bringing the company team together.  This time, several professionals who had never taken part in it , signed, up to support the company president’s return, “’Completing the race was a victory  But knowing that 28  persons who had never run came to support me was an even greater victory, because I am sure that at least half of them will not stop any more”, said  Menezes.
The moment Eduardo Menezes crossed the finish line was very touching for him and for the entire DELPHOS’ family. To celebrate this victory, he went up the podium to receive the trophy  on behalf of the company for having the  largest team paricipating in the race.
According to company vice-president Elisabete Prado, “DELPHOS’ Life Quality Program was created in 2003, with the purpose of assuring a more balanced and healthier life to those working in the company.. The program brings forth several benefits, highlighting sports,  proper nourishment and a good working environment. ”
In addition to the improvements brought about in productivity, the Life Quality Program , in 15 years, has contributed twice to preventing  readjustment to the annual health insurance premium, and, in one year, to reducing it on account of lower claim level .
On Delphos:  Being active for 50 years, Delphos was the first service company created to specifically meet the Brazilian insurance market.  The company is qualified to render services in any activity related to the various insurance branches, from preliminary risk analysis to claim regulation, with highlight to information technology.
Fonte: REVISTA COBERTURA – JANEIRO/2018
Compartilhar esta postagem
Share on FacebookShare on Facebook TweetShare on Twitter Share on LinkedInShare on LinkedIn Share on WhatsAppShare on WhatsApp