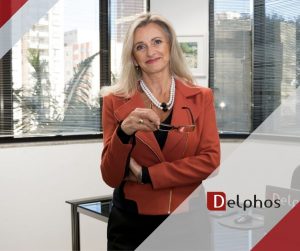 For Elisabete  Prado, the mission of being at the helm of this traditional and renowned insurance market service provider , is viewed as a great challenge as the company has always been presided over by its founding shareholders and, in the last 14 years, by Eduardo Menezes who, despite not having been a founder, is the son of them , and Delphos’ main shareholder. Delphos , throughout its 54 years, has always been under the direct control of the family, except for a short period in a distant past. That is , the responsibility is immense, but the trust bestowed on me shall make me take care of the company as if I were a family member. The moment is interesting, as we are at the implementation phase of a highly-complex project which, in the long run, shall lead the company toward a great quality leap.

In addition to  Elisabete Prado in the Presidency, Delphos’ shareholders elected, at the general meeting held on April 12 th, the Board of Officers which will steer the company from May 2021 to April 2022.

Fernando da Silva Menezes will be commercial director for new businesses. Admitted in 2007 as financial assistant, he became planning and control director, and later, Director in charge of Delphos Investments and for Delphos Assistance to Persons and Assets, returning to Delphos to take up the corporate management directoship.

Nei Tadami Ogawa  was admitted to the company in 2009 as IT superintendent, left in 2013 for other endeavors, and returned in August 2020 as IT director.

Women Shine
Delphos’ Presidency under Elisabete’s command also represents a new stage for women’s conquests throughout the entire insurance market , in which women’s participation has steadily been increasing in the highest hierarchical positions.

Elisabete Prado reveals that , at Delphos, women correspond to 31% of the total headcount. She admits  that, in absolute terms, the number is still small. However, she points out that the company relies on women in very relevant positions, such as , in the coordination of the process management area, Law, HR, Information Security, Compliance , and GDPL (LGPD).

“I am very happy and honored to be one more woman to rise to a position of command in an insurance market company. This is a recognition to the work that many of us carry out with dedication and competence. My wish is that many others join in this undertaking.

Support
Upon taking leave of Delphos’ Presidency, Eduardo Menezes left a message to all collaborators : “To this team I wish the greatest success ever and that you surpass, by far , the results we had when I was company president. To All Delphos’ crew , I ask you to unconditionally support the new Board”. de forma incondicional”.